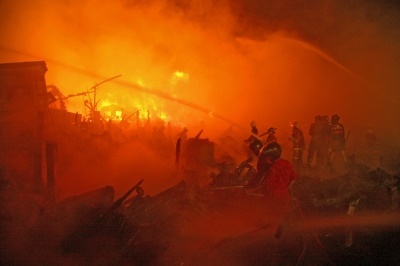 Imagine eight acoustic guitarists, a bazouki player and a girl on a glockenspiel, all simultaneously doing their thing in the corner of a small-town pub, doing a cover of a Turin Brakes song, when a fire breaks out on the table.

Imagine you weren’t even there at the time – you’d wandered back in from having been for a pee and found the smoke alarm going off and a right to-do going on, with the nasty acrid smell of burning plastic, and bewildered musicians beating out a burning table with their bare hands.

Then imagine it becomes evident that it was you that started the conflagration, by leaving a pile of papers and folders far too close to a lighted candle.

And an expensive violin, which had been lying on the table minding its own business, has been scorched in the flames.

Embarrassing. Very embarrassing. The only consolation was that the landlord didn’t seem to mind – he seemed kind of tired and beaten, more than angry, almost as though this was just another of the tribulations of running a British pub. And, as luck should have it, the owner of the violin just happened to be… guess what… a professional violin repairer and restorer. What are the chances of that happening? She was very nice about it and said she could sort out her charred instrument in the workshop. So things could have been a lot worse, though I did feel a bit of a berk, what with this having been my first visit to this particular music night.

Anyhow, the next day was Wednesday and I got a call from a recruitment agent about a temporary editing position I applied for a while back. “It’s for two months and they want someone to start straight away,” he cautioned. “Yeah, yeah,” I thought, having heard that particular phrase before from recruitment types. It usually means “in about six weeks, when we’ve sorted the paperwork out”. But no, he meant “straight away”. “Will tomorrow be OK?” he asked.

WTF???!!! I played for time. “How about Monday?” I suggested, wondering how the hell I was going to get the stuff done I’d been lingering over. Monday, it seemed, was far too late, and we split the difference and settled for Friday.

You can imagine the scene as I rushed to get work clothes washed and ironed, my usual uniform being leggings, a lunch-stained T shirt and slippers.

More on the new job another time. It was better than I expected: the people were nice, the bus stops outside, and there were three types of teabag, free milk and a massive fridge in the kitchen. Any employer who thinks of their workers’ beverage needs in this way can’t be bad.

Anyhow, I got home after my first day and checked my emails to find that TWO people wanted to talk to me about proofreading and copywriting work. Two! In one day! Talk about buses all coming at once. One had been recommended by a website developer I did some work for recently and I ended up speaking to him on the phone till 10.30pm about his project. The other, the owner of a marketing agency, had, believe it or not, got my details from a guitarist I met while I was setting fire to the pub. I’d been so busy apologising to everyone over the violin catastrophe that I didn’t even realise this chap was vaguely in my line of work in his day-job.

It doesn’t stop there. Had another email yesterday from an old colleague and drinking buddy, who wants to meet up to discuss some writing work he might be able to put my way.

Quite why I’m so popular all of a sudden, after a fairly quiet spell, is thoroughly inexplicable. Maybe it’s my new perfume.

8 thoughts on “I get a job, become inexplicably popular and start a fire in the pub – a week of strange variety”